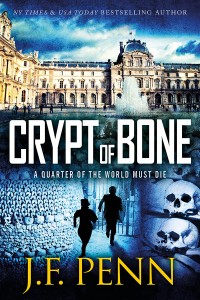 … And now a shadowy organization has the ability to fulfill these words. Can one woman stop the abomination before it’s too late?

ISRAEL. A victim of Jerusalem Syndrome jumps to his death from the top of the Western Wall, his body smashed on the ancient stones. Another disembowels himself under the scrawled figure of the Pale Horse of the Apocalypse with the chilling words, “God told me to do it.”

Dr Morgan Sierra travels to Israel to investigate the deaths and becomes embroiled in an international conspiracy that will use cutting-edge technology to carry an ancient curse to mankind, and threaten those she loves.

Morgan joins agent Jake Timber at ARKANE, a secret government agency investigating the supernatural. Together they must hunt down the Devil’s Bible, pursued all the way by the evil forces of Thanatos.

From the catacombs of Paris to the skeletal ossuaries of Sicily and the Czech Republic, Morgan and Jake must find the Devil’s Bible and stop the curse being released into the world before one in four are destroyed in the coming holocaust. Because in just seven days, the final curse will be spoken and the prophecy will be fulfilled.

“Penn…has a background in theology and she employs this to great effect again in this novel. These books are as intelligent as they are gripping. She has also upped the supernatural ante since Pentecost and created a demonic villain (or two) that rise to the spiritual struggle inherent in the book’s premise. The final showdown between Morgan and the forces of evil will stay with you long after you have finished this compelling, page-turning thriller.” Orna Ross, author of ‘After The Rising’

“The action moves swiftly but the suspense never wanes, as Penn uses her vast knowledge to inform and educate the reader in a seamless unfolding of this fast-moving tale. Exotic locations and supernatural artifacts add to the adventure. Pentecost has been described as Lara Croft meets Indiana Jones and there are certainly elements of both to be found in these thrillers. However, I feel Joanna Penn has managed to establish her own voice in this series delivering strong characters and creative, but believable, plots. I’m already in line for the next one!” Patricia Sands

“Penn has a degree in theology and her knowledge and research, of ideas and locations, really shines through in these stories…as rollicking thrillers these books are great – perfect for holiday reading.” Alan Baxter, dark fantasy author of Realmshift & Magesign

“Prophecy is a gripping tale, plunging the reader into a race against a shadowy organization and its doomsday plot. Death lurks around every corner as Morgan Sierra and her partner Jake explore ancient ossuaries and dark catacombs in search of a sinister and deadly artifact. Mystery and adventure that is sure to please readers who love a good religious thriller.” David Wood, action-adventure author of Quest, Dourado and Cibola

“If you’re a fan of Dan Brown, then Joanna Penn is the author for you. Like Brown, Penn weaves information about religious art, icons and history with modern-day fears. The result is a face paced read, one that kept me up past my bedtime because I wanted to know what happens next.” Natalie Wright

“I particularly like the main character, the strong, intelligent, and attractive Morgan Sierra. Joanna Penn uses her academic training in Theology and Psychology to weave an intriguing page-turner in which Morgan must locate an artifact and prevent the Apocalyptic prophecy. I love learning as I read, and this book did not disappoint me. Through it, I learned about the God Helmet, The Devil’s Bible, the ossuaries, and various art and architecture. Joanna Penn seamlessly interlaces the facts with the story, creating a wonderfully vibrant and compelling story.” Jane V Blanchard, Amazon.com

“This book is a fantastic follow up to Pentecost. Ms. Penn has done it again with a thrilling mystery that kept me on the edge of my seat all day waiting for the end. With a mix of historical facts and fiction, the characters are caught up in a good vs evil ride through Revelation and the end times. The evil characters are truly scary and the heroes are well written. The idea behind the book is one that has a basis in history and could actual be believable in real life. The scariest part is that there are possibilities with enough money, enough connections and the wrong ideas to make something like this happen. I will be awaiting the next book in the series to see what happens with Jake and Morgan and ARKANE next. ” Susan HockeyFan7 on Amazon.com

4/5 for Prophecy from Book Blogger Louise Wise “Morgan’s group, Arkane, was a brilliant and convincing organisation, I was tempted to Google it to make sure it really was fiction! The book was intelligent, the pace fast, and over all a very good read for thriller readers. It was very well researched, and I felt I was in the hands of a very competent author.”

5 stars from Seeley James: “raises the bar for the stable of authors hiding behind old school, 20th Century publishers. Years ago Daniel Silva raised the bar in the thriller genre to include serious art references. James Rollins raised the bar to include real science applied in believable ways. And Steve Berry raised the bar to include serious historical and travel elements. The bar has been raised again. Ms. Penn brings all three elements into her thriller by combining her considerable knowledge of theology, her passion for psychology and science, and a deep appreciation for art. I love it when I read a book and feel like I’ve learned something. If you read Prophecy, you will learn something.”