The Ark of the Covenant continues to inspire investigation and I did a lot of research for Exodus and loved weaving it into the ARKANE story.

Recently, ABC released a series of videos about biblical archaeology and in one of them, Christiane Amanpour visits the tunnels beneath Jerusalem and Aksum in Ethiopia (click here to view on ABC) looking for the Ark [8 mins].

One of the important clues in the next ARKANE book, Exodus, comes from a manuscript fragment found in the monastery of St Catherines in the Sinai, Egypt. No spoilers here, but Morgan Sierra must find a possible location for the Ark of the Covenant at the traditional place where Moses received the Ten Commandments.

St Catherine's has one of the most extensive collections of ancient manuscripts in the world, mainly due to the fact that the monastery was never sacked. It is remotely situated in the Sinai desert but was also granted a protection from the Prophet Mohammed so the monastery was safe during the expansion of Islam across North Africa. The dry climate also makes it perfect for manuscript preservation.

The Codex Sinaticus is just one of the manuscripts that was found at St Catherine's and it is now mostly held by the British Library in London, although fragments remain at the monastery as well. Written in the middle of the 4th century, it is the oldest complete copy of the Christian New Testament, and also contains the Septuagint Old Testament. It is written in ancient Greek and is so fascinating because of how many corrections there are, from individual letters to whole sentences, as well as the differences it represents to the Bible used today. This 2 min video gives you an initial view of the Codex.

The entire Codex has now been digitized and you can read it online – with some translation available if your ancient Greek is rusty! I actually did a whole semester during my Theology degree at Oxford translating John's Gospel from ancient Greek so it is a particular thrill to me to be able to read the text itself. I have seen the actual book at the British Library, it's indeed a marvel and I just had to include it in Exodus.

Palimpsests are pages or scrolls that have been used once, then scraped and used again, but with certain technologies, the original text underneath can be read and exposed. Because material for writing was rare and expensive, in ancient times, they often reused scrolls. One of the most famous is the Archimedes Palimpsest where a 10th century Byzantine prayerbook was written over the original mathematical text from Archimedes dated around 200 BC.

St Catherine's monastery is now working with a team to digitize the manuscripts that remain – this article in the Washington Post (Sept 2012) discusses the preservation project and also the 130 palimpsests, the texts written under other texts, that have been found on the site.

I find the idea of palimpsests to be fascinating, and even the word itself is evocative. What riches could be found under the many thousands of ancient documents in the Vatican archives? What will researchers find with new technologies? And how does a fragment of such a text impact the plot of Exodus?

There’s a magic moment for me, and probably other writers, when the story suddenly emerges from the writing. For me, that happened yesterday when it seemed that all the stars aligned and synchronicity blazed and I was writing in the flow, and the story came to life. [Text below the short video]

Let me explain a little more.

ARK OF BLOOD (previously published as Exodus) is my third novel and is based around a hunt for the Ark of the Covenant as the Middle East counts down to a religious war. I’ve been researching the Ark and possible locations for six months, reading the official papers and also the conspiracy theorists.

I have my series characters in place and my secret government agency, ARKANE which investigates religious mysteries. I had a broad outline and had started writing, but the story hadn’t really caught fire for me.

Then yesterday, that magic moment happened.

I visited the United Grand Lodge of England, the Freemasons Grand Temple in London, and what I saw there crystallized a whole load of ideas. It’s an awesome place, full of symbolism and hints at the secrets that lie within. 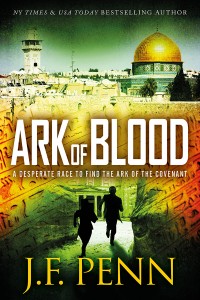 Then I went to a spin class and while I was cycling away, the ideas mashed together and the rest of the story fell into place. It fits the research theories and it fits some of the conspiracy theories. My story could actually be plausible, which for me, is essential for a thriller. I won’t give too much of the plot away, but I wanted to share this magic moment and part of how I write a novel.

So I am 40,000 words into the book now, but I know where the story goes from here. I just need to get the words down for the first draft and then move into the editing phase. But this is a precious moment, when you know there’s a story to be told, one that will intrigue and entertain people.

You’ll have to read ARK OF BLOOD to find out where the Ark of the Covenant might be!

While researching my thriller, Ark of Blood, I read Sigmund Freud's final book, Moses and Monotheism, written in London in the final year of his life after being exiled from Vienna in the wake of the Nazi invasion. As a self-proclaimed ‘godless Jew,' he spent his life avoiding his own faith in many ways but returned to it in the final years, trying to explain anti-Semitism, as well as investigating the origins of Judaism.

The book claims Moses was an Egyptian, murdered in the desert by the Hebrews and that the guilt of the murder of the father figure has stayed with Judaism ever since. It's a complicated book but a fascinating one and in fact, many of the objects in Freud's study link him with ancient Egypt, which I explore further in Ark of Blood.

I visited the house, now a museum, that he lived in with his family and where Anna Freud continued to practice after his death. It is on a suburban street in Hampstead, a normal brick house of reasonable size, but certainly not as grand as you might expect from the man who cast such a long shadow with his writing and influence.

His study is that of an archaeologist, not a medical doctor. It is crammed with artifacts from ancient Egypt, Greece, and Rome, as well as tools from other cultures. His desk (shown above) has two rows of ancient gods with barely any room left for writing. Of particular note is the white marble statue of the Egyptian god Thoth in his baboon incarnation. Thoth was the god of writing, of wisdom, science and was also a key part of the judgment of the dead.

Also on the desk is a modern metal porcupine which is from America, from the trip to Clark University which features in Stone of Fire. I was quite thrilled to see it there – sometimes fiction moves into fact and vice versa!

Also in the study are two prints that feature in Ark of Blood. A copy of Rembrandt's Moses holding the tablets of the Law, a black and white cross-hatched image that shows Freud's interest in Moses at this point in his life.

The other is a night scene of Abu Simbel, a massive rock tomb and temple in Southern Egypt which I have visited and remains a deeply resonant place for me. The print is fascinating as there is a light coming from inside the long-abandoned tomb — what might be happening inside?

You can find out about the Freud Museum here and if you're in London and fancy a slightly different kind of tourist experience, get off the beaten track and head to Hampstead.

Join the adventure in Ark of Blood.

It is the seat of judgment. The pinnacle of holiness. It is the Ark of the Covenant… and it’s the most dangerous weapon in existence.